It’s hard to believe that it has been 26 years since Squirrel Nut Zippers emerged on the music scene.  The debut album, The Inevitable was a breath of fresh air in an era of pop and metal music.  I saw them in 2018 when they did the Beasts of Burgundy album tour.  For this tour they were doing The Inevitable and a lot of songs from their newest album Lost Songs of Doc Souchon.

Squirrel Nut Zippers are both a musical band and a performance act.  Between the multiple costumes of Cella Blue, Dr. Sick bouncing around the stage playing multiple instruments and the antics of Jimbo, you as the audience get a real fun performance.  Cella Blue sang on about half of the songs and in-between she was changing costumes.  Jimbo and Dr. Sick changed off between guitars and banjo for a number of songs.  At one point in the show, Jimbo put on a skeleton mask and danced around on the stage.  For another song, Dr. Sick put on a Devil’s mask and played the fiddle.  At the end of the main set, Jimbo asked for the lights to dim, a movie screen drops down behind the band and a video started to play.  It was the “Ghost of Stephen Foster”.  It’s an old-time cartoon style movie clip.  As the movie plays, the band started to play and sing in-sync with the movie.  You can check out the movie and song on YouTube here: https://www.youtube.com/watch?v=KJzWGkgFcTU or look up “Ghost of Stephen Foster” on YouTube.  They finished the night with a 4-song set, including “Mr. Wonderful” and “Plenty More” being sung by saxophone player, Hank West.

If you want to see a really good bunch of musicians having fun on stage and music that is just fun to listen to, then I would highly recommend seeing Squirrel Nut Zippers.  They are just one of those bands that I enjoy more each time I see them.

You can find future tour dates and more information about Squirrel Nut Zippers on their website and Facebook page. 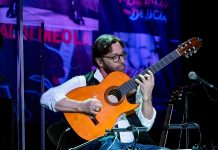 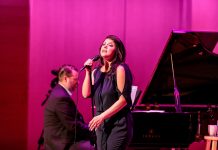 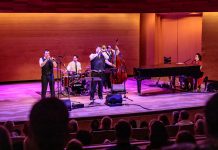 Davina And The Vagabonds entertain audience at The MIM 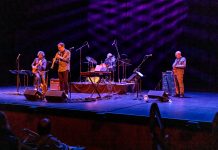 Soft Machine, Its Been a Long Time Coming 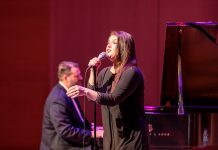